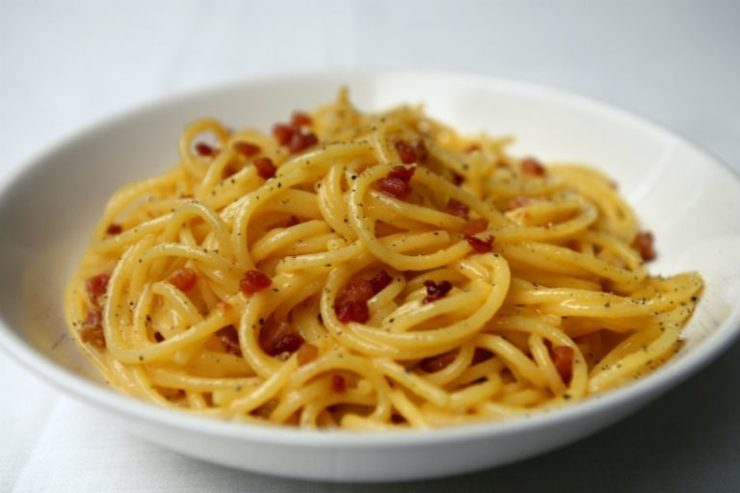 There are many imaginative legends on the origins of carbonara and the circumstances of the dish’s birth seem to be lost in a past that’s as distant as it is mysterious. In actual fact, it’s possible to reconstruct the history starting from the first published recipe (hint, it’s not italian!).

Let’s please dispel a myth: there are no ancient progenitors of carbonara. The story of humble and industrious shepherds (or charcoal miners) who fill the bowl of spaghetti with eggs, guanciale and pecorino from the mists of time is as fascinating as it is unhistorical. With all due caution, it can be said that things have gone differently

The origin of a dish can be found recipe books

Starting from the historical cookbooks, the first example of mixing eggs and pasta in “Il cuoco galante” by Neapolitan Vincenzo Corrado, printed in 1773, followed by the “Theoretical-practical kitchen” of fellow Neapolitan IppolitoCavalcanti. In these two cases the egg was used only as a thickener for pasta cooked in broth, fried dough balls or pasta timballos, preparations very distant, not only from carbonara, but also from the very conception of pasta. A decisive step forward was made by Francesco Palma, another Neapolitan, who describes Maccheroni with cheese and eggs, in which he combines grated cheese, eggs and lard, in a plate of macaroni.

The use of lard or guanciale (pork jowl) as a condiment for pasta is instead recorded by cookbooks only much later. Let’s remember the recipe for Spaghetti al guanciale published in “The little talisman of happiness” by Ada Boni in 1949. Unfortunately, in none of her recipes are eggs present, so at most considered the first examples of gricia, even if this moniker is imposed only much later in time. And speaking of names: when was the name carbonara mentioned for the first time? Strange but true, the name first appeared in a film.

The carbonara recipe comes from the United States

In the 1951 film “Cameriera bella presence” during an unusual job interview with the waitress Maria, played by Elsa Merlini, the employer asks: “Excuse me a moment, but do you know how to make spaghetti carbonara?”. Even in the film’s fiction the recipe was not so widespread, considering the waitress does not know it (while she’s able to prepare spaghetti amatriciana). In the same year a second quote appears in the book “Lunga vita di Trilussa” by Mario dell’Arco: “It’s difficult for our poet to adress spaghetti ‘alla carbonara’ or ‘alla carettiera’…” But going back to the recipes, the first carbonara recipe seems to have been published in the United States in 1952 in a guide to restaurants in a district of Chicago entitled “An extraordinary guide to what is cooking on Chicago’s Near North Side” by Patricia Bronté. In the review of the restaurant “Armando’s” the author reports a rather precise recipe and you can’t go wrong: it’s definitely the carbonara we all know. The appearance of the first Italian recipe (but not as we know it today) is instead dated August 1954, when it appeared in the magazine La Cucina Italiana. Here the ingredients are: spaghetti, egg, pancetta, gruyere and garlic.

The presence of garlic and especially of the Gruyère may cause more than one concern, but they’re consistent with a recipe that was still little known domestically and in full course of definition then. The following year carbonara enters for the first time in a real cookbook, “The lady in the kitchen” by Felix Dessì in a version more similar to today’s one, with the presence of eggs, pepper, Parmigiano (but if you prefer spicy cheese, a good pecorino can replace it) and pancetta.

The addition of guanciale

But the definitive consecration as a national recipe takes place with the publication in the cookbook of LuigiCarnacina “La grande cucina” in 1960. For the first time pork jowl is introduced, replacing pancetta, and the heavy cream that will often be present in the recipe until the end of the 1980s in important quantities (as in the 1989 version of Gualtiero Marchesi who recommends a quarter of a liter on 400 g of spaghetti). In its first forty years of life, in addition to cream, other ingredients find their own space in the recipe, such as wine, garlic, onion, parsley, sweet pepper, pepper and chilli, demonstrating an extreme variability of the composition. In the 90s versions of carbonara all these ingredients will slowly be eliminated allowing the slow but constant affirmation of the three classic ingredients that everyone knows today: egg (with a clear prevalence of the yolk), pecorino cheese and guanciale with the addition of abundant black pepper.

Origins of the dish

As for the circumstances surrounding the birth of this dish, it’s plausible that the availability of US military rations in the immediate post-WWII period provided the decisive impetus for the construction of this recipe. The combination of the typical American inclination for eggs and bacon along with pasta dressed with cheese has led to its immediate success on both sides of the Atlantic. But to whom do we owe this invention? The hypotheses are different, but above all the story, never denied, by RenatoGualandi prevails. This young chef of Bolognese origin was hired on September 22nd, 1944 to prepare a lunch for the official meeting between the English Eighth Army Division and the American Fifth Army Division in the newly liberated Riccione.

Making virtue out of necessity, the cook unconsciously created a dish destined to become famous all over the world: “The Americans had fantastic bacon, delicious heavy cream, cheese and powdered egg yolks. I put it all together and served this pasta to the generals and officers for dinner. At the last moment I decided to put some black pepper that gave off an excellent taste. I cooked the egg quite “runny” and they were conquered by the pasta”. Later Gualandi became a cook for the allied troops in Rome from September 1944 to April 1945 and this period was enough to spread the fame of carbonara in the Capital.

Obviously the story of the carbonara invented in Riccione in 1944 by a Bolognese chef using the rations of the American army, can generate some perplexity among purists (sometimes authentic fundamentalists without any historical justification) of the Roman tradition, but this does not make the matter less truthful or plausible. On the other hand, we like to think that carbonara is the result of the all Italian great skill of culinary improvisation that has created a masterpiece in one of the most difficult moments of our history..