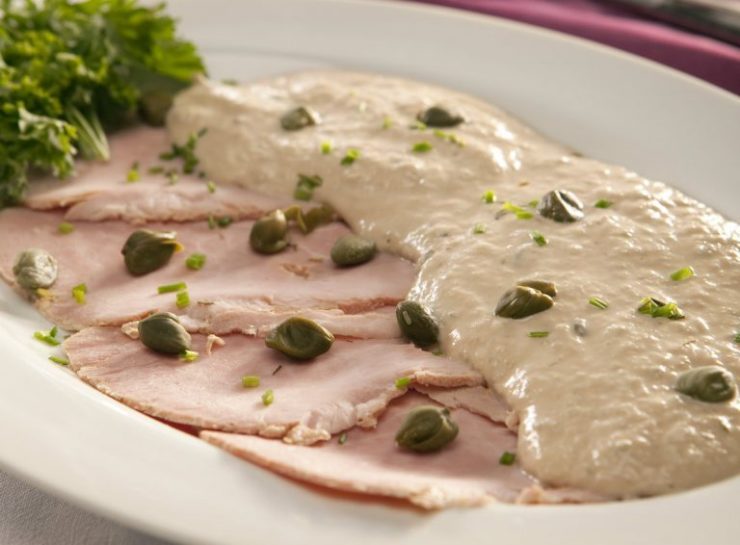 The origin of vitello tonnato, a dish that has undergone many variations over time.

The events that determine the birth of traditional recipes are often vague and with unexpected twists The creation of the vitello tonnato recipe (also called vitel tonné in some menus) is certainly one of the most curious, the result of a historical journey that has led to the combination of two gastronomically very distant ingredients.

At the table the division between meat and fish has always been particularly marked and the traditional recipes that include the presence of both these two ingredients are rare. In large part this is due to the precepts that marked the eating habits from the Middle Ages to the end of the 19th century with the juxtaposition of “fat” food, represented by meat, to “lean” food constituted quintessentially by fish. And even today, not only the dishes, but also the menus and the sequence of courses within the homespun meal usually do not contemplate the cohabitation of the two foods.

The vitello tonnato is the exception

The dish was born thanks to a particularly imaginative cook who wanted to challenge conventions by associating fish and meat? Or is there an underground tradition that contravenes the rules? None of this, rather a bit of both. Surely the first culprit is the anchovy.

The anchovy and the veal

This small fish, historically always preserved in salt, was used as a flavour boost for meat or, more often, 18th century meat sauces. For example, in the “Piedmontese Cook” published in 1766 are several recipes that include the use of anchovies such as “German-style veal brisket” seasoned with a sauce made with capers, anchovies, bird liver, parsley and carrot; or the “Veal à la Lyonnaise” wrapped with anchovies, cucumbers and slices of lard. Among the sauces is the “Remoulade” made with parsley, garlic, onion, anchovy, salt, pepper and mustard, diluted in oil and vinegar: which can be considered an ancestor of today’s Lombard gremolada.

In the same period tuna was considered a not particularly delicious fish specialty that was sold mostly packed in oil or in vinegar. Sold fresh, tuna was considered rather indigestible and Francesco Leonardi in his “L’Apicio Moderno” published in 1790 advises to marinade it in a salt rub for a few hours before cooking so that “the meat will have a more grateful taste, and will be somewhat reminiscent of veal”.

Neither fish nor flesh

This resemblance did not go unnoticed and became be the base of the recipes that later gave life to the ancestor of vitello tonnato. In fact, the first 19th century preparations never mixed fish with meat, but rather proposed treating the veal “like tuna”, subjecting it to a short salting and then boiling it and then storing it in oil. One of the oldest examples comes from a French text, the “Dictionnaire de cuisine et d’économie ménagère” published in 1836 by M. Burnet with the unequivocal title “Manière de donner au veau l’apparence et le goût du thon mariné” (How to give veal the appearance and taste of marinated tuna). In this case, the veal is brined in salt for a few days with various aromas and some anchovy fillets, then boiled in white wine and finally placed in oil immersed in a glass container, and enjoyed like tuna.

The recipe for the “Tuna veal” later evolved with minimal variations from the previous French in “The new economic Ticinese chef” by Luigi Franconi in 1846 and by Felice Luraschi in the “New Milanese economic chef” of 1853. The latter author also suggests serving it with oil and lemon and an “anchioda sauce” made with veal stock, onion, anchovies and capers thickened with semolina flour.

A dermatologist in the kitchen

All the ingredients of the accompanying sauce are all there, only the tuna was still missing. This is when the change happens and makes the small, but decisive final step. The name is Angelo Dubini, Milanese, of medical profession and researcher, remembered for having discovered an intestinal parasite hitherto unknown and to have been chief of dermatology at the Ospedale Maggiore of Milan.

In addition to numerous medical essays, in 1862 Dubini published a recipe book called “The kitchen of weak stomachs: that is, a few uncommon, simple, cheap and easy to digest dishes with some rules on good governance of the digestive tract” which contains three different recipes for “Vitello tonnato”. The preparations, like the author, are unconventional and give up the idea of keeping the veal in oil, so the stewed meat is simply served cold. One of these, for the first time, uses a sauce composed of minced tuna and anchovy then diluted with the cooking base of the veal along with oil and lemon. Once the intention to simulate the tuna in oil with veal was abandoned, it seemed rather natural to directly associate the two foods in the same dish, as well as in the title of the recipe.

The role of the canning industry

Probably the development of the canning industry that was taking its first steps in the oil-packed tuna industry played a decisive role. The method, derived from the invention of Nicolas Appert, spread first in France and in England to then later landed in Italy. Among the pioneers canners in Italy we remember Carpaneto and Ghilino in Genoa, a plant that started using tins for the preservation of Sardinian tuna in oil. A road that was soon followed by many others and made this food available in all households.

The version of the veal topped with tuna sauce was soon taken up by other authors, among whom Artusi in 1891 who advised to boil the veal and, once cold, let it marinate for two or three days covered by a sauce composed of tuna, anchovies, capers, oil and lemon. A particular version is also proposed by Ada Boni in the “Talisman of happiness” published 1927: she cooks the veal in a pot with onion, tuna, anchovies and white wine and then obtains a sauce from the same cooking base diluted with oil and lemon juice.

The same recipe is also used in the recipe “Vitello tonnato n. 1” present in The silver spoon published in 1950, while in the “Vitello tonnato n. 2” the sauce is enriched with mayonnaise, a novelty that made it more velvety and creamy. This version, today the most canonical and popular, met great success with families and restaurateurs, as also demonstrated with the inclusion of the recipe among the Lombard specialties by Anna Gosetti della Salda in “Italian regional recipes” published in 1967, where she advises to prepare the sauce with an “abundant mayonnaise”.

The disappearance of the oil-packed veal

The popularity of vitello tonnato was such that it overshadowed the original recipe of the “tuna veal” from which it originated. This dish disappeared definitively from recipe books within a couple of decades, but there is still today a very similar preparation in which the cooked rabbit meat is used and preserved in oil called “rabbit tuna”.

For those wishing to revive the original recipe for a tasty and unusual cold appetizer, below is the transcription of “Veal made like tuna” by Luigi Franconi published in “The new economic chef from Ticino” of 1846: “Take a veal rump, beat it somewhat, wrap it in a towel, leave it in a salt brine for two days, remove it from the salt, wash it in fresh water, cook it in a broth with a bay leaf, then remove it from the pot, prepare the oil almost boiling, leave it inside to soak for not less than three days, then serve it with oil and lemon juice, dressed with any raw salad”