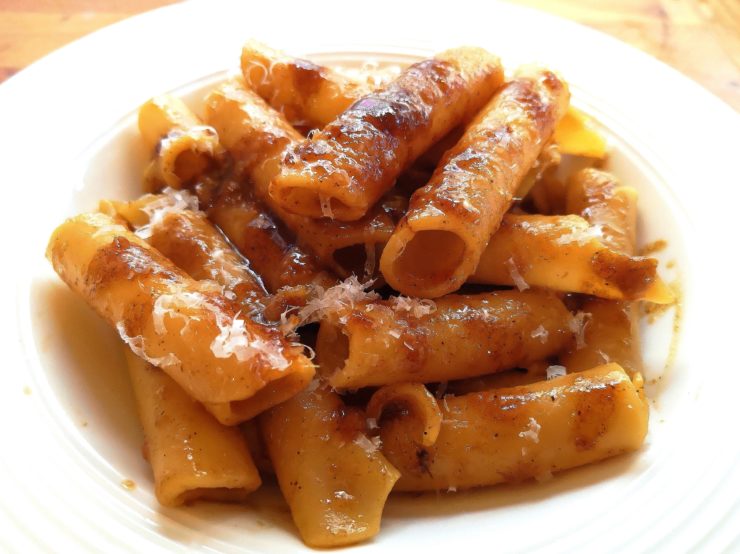 WE ATTEMPTED MAKING MEAT SAUCE, A FABULOUS CONCENTRATION OF FLAVOURS AND AROMAS THAT HAVE GRADUALLY DISAPPEARED FROM COOKBOOKS OVER THE YEARS.

Its use in today’s gastronomy has now completely disappeared and only a trace remains in brown stock rediscovered by some great restaurants. But we think it’s worth bringing back meat sauce, a fabulous concentration of flavours and aromas that provides depth to many preparations, from Neaqpolitan-style macaroni to meatballs.

It seems that the recipe for “Maccaroni alla Napolitana” was recorded for the first time by Francesco Leonardi in his monumental work “L’Apicio moderno” in 1790. The description is quite simple and requires “to cook macaroni with water and salt, drained and tossed in the bowl with grated parmigiano, crushed pepper and veal sauce, or beef, that is a good stew broth, with cloves, then passed through a fine mesh strainer”.

Two variations of the same recipe for Maccaroni alla Napolitana

In essence, Leonardi provides two variants of the same recipe: the first uses a beef or veal based meat sauce, while the second uses a sauce made from a beef stew, simple or flavoured with cloves. These two types of seasoning, very similar at the time when they were being chronicled, developed autonomously over the decades and respectively gave life to the “genovese” ragù and the Neapolitan ragù.

The uses of meat sauce until the early 20th century

Both versions required the use of this fragrant dark liquid which, combined with Parmigiano, was intended to flavour Neapolitan macaroni and the tortellini Bolognese, while half a century later it will be used for Genoese lasagna. In particular, the meat sauce was included in almost all cookbooks of the time and used as a flavouring in the kitchen until the early 20th century. Its use in today’s gastronomy has now completely disappeared and only a trace remains in the brown stock, now rediscovered by some great restaurants. In our opinion it’s definitely worth bringing it back to life.

Like many ancient recipes, execution takes some time, but it’s certainly worth it.

The preparation involves first of all the preparation of a substantial beef broth that is used to extract and concentrate the aromas of the beef sauce.

1 kg di external topside or bottom round of beef in a single piece (Leonardi calls it “culatta” ). Can be substituted with any cut derived from the loin or from the chest.

a small bunch of parsley stems

After washing the piece of meat, tie it and dip it in cold water with the vegetables and very little salt and boiling over low heat for five or six hours. During cooking, carefully remove the scum that comes to the surface with a strainer, and then strain the broth with a cheesecloth.

1/2 kg beef cut into stew, better if taken from the neck (chuck) or from the shoulder (brisket)

50 g prosciutto in one single slice

Put the butter, lardo and prosciutto in a large poy and brown them. As soon as they are lightly browned, cover them with coarsely chopped vegetables and then with the beef. Let the meat brown evenly on all sides: this is a fundamental step to obtain a perfect result. Once the ingredients are browned, add a ladle of broth and place the pot over moderate heat. When all the broth has absorved, raise the heat slightly and continue stirring constantly until a dark and viscous glaze forms on the bottom of the pot. This part is very important because it allows the formation of complex aromas thanks to the Maillard reaction which gives body and thickness to the meat sauce. Finally add the remaining broth, stirring well and continue to cook for at least a couple of hours over a low heat. Let the liquid concentrate by at least 2/3 and, once ready, pass it through a sieve, or better through a cheesecloth. Allow the liquid to cool and degrease it before using it.

For the Neapolitan-style macaroni, use hand-broken ziti pasta that, once boiled and drained, must first be sprinkled with plenty of Parmigiano, and then add the beef sauce and frshly cracked black pepper

Another way to use meat sauce

Another way to use the sauce is by making culì, that is a thicker sauce, also known as “Spanish sauce”. The procedure is very simple: just put a knob of butter and a tablespoon of flour in a saucepan over medium heat and mix them continuously until the mixture becomes a nice hazelnut colour. This composition is called “Rosso” by Leonardi and derives directly from the roux that is still made today for bechamel sauce. Simply add the roux to the sauce when at a light simmer, stirring well to obtain a thick but fluid sauce that can be used to flavour meat roasts.

The meats cooked for broth and the meat sauce, suitably shredded, can be reused in place of ground meat in your favourite meatball recipe. The result is a sure success.