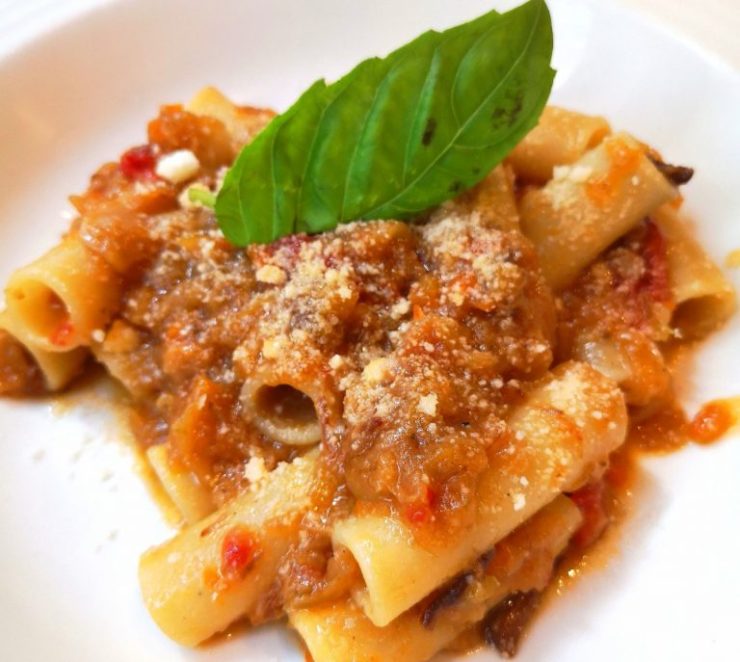 WE COMBED THROUGH OLD RECIPE BOOKS TO UNDERSTAND THE ORIGIN OF PASTA ALLA GENOVESE.

In addition to ragù alla napoletana, Naples is also famous for pasta alla genovese. We reserarched the origins of this recipe.

The pasta alla genovese that we all know is based on a tomato-less meat sauce, onions and a few other ingredients that are slow-cooked until the ragout becomes a creamy and fragrant sauce that is served on pasta with a good sprinkling of grated cheese. It essentially differs from the Neapolitan-style ragù for the type of meat used––which in this recipe is strictly beef––and for the absence of tomato.

The most imaginative hypotheses have been made to justify the name of this dish, starting from the Genoese citizens present in the taverns of the Naples port during the 15th century Aragonese domination, by way of a genius unidentified Neapolitan gastronome nicknamed “o’ Genovese”. Stories also mention the famed Ippolito Cavalcantiwho, in his 1837 recipe book, reports several “alla genovese” dishes, of which none unfortunately resemble condiments for pasta.

The last mention, however, is the one that comes closest to reality. During the 19th century one of the “styles” or in any case, the geographical indication that characterized a numbe rof recipes, was precisely the “alla genoese” style. Along with this, the most famous were also “alla lombarda”, “alla bolognese” and of course “alla napoletana”, but other places such as Milan, Rome, Venice and Sicily were also mentioned.

Among specialties associated to the Ligurian capital, just before the mid-19th century, mentioned in Italian cookbooks are the first “Genoese lasagna” destined for a big success for the next half century. As it often happened at the time, there were two versions: “lean”, seasoned with a garlic, basil and pecorino pesto sauce; and a “fat” version, in which the pasta sheets were garnished with meat sauce and parmigiano.

A few decades before, “Maccaroni alla Napolitana”––described for the first time by Francesco Leonardi in his “Modern Apicius” volume published in 1790––had already come to the fore in the gastronomic literature of the time and later taken up by several other authors. The recipe can be considered the ancestor of all the Neapolitan ragù sauces, and prescribes to dress the pasta “with grated parmigiano, crushed pepper, and veal or beef sauce, or a good stew broth, or carnation”.This pasta dish could then be seasoned in two ways: with a meat sauce (of veal or beef), or with the sauce of a beef stew (simple or flavoured with cloves) to which tomato could also be added.

The first condiment, based on meat sauce, therefore united both the “Neapolitan” and the “Genoese” method so much that several publications brought them together in the same recipe. For example, the “New agricultural encyclopedia” of 1859 for the Neapolitan Macaroni includes the same seasoning “that is practiced for Genovese lasagna” or with “meat sauce and Pamigiano cheese”, or even the “Simple and affordable bourgeois cuisine” of 1863 contains a recipe with the unmistakable title: “Macaroni or lasagna from Genoa or Naples of the bourgeoisie”.

Small parenthesis: what is the meat sauce

But what exactly is this meat sauce these authors are talking about? It’s a base widely used as a seasoning starting from the mid-18th century which remains in use until the early 20th century. It’s described by many authors and usually involves a substantial browning of pieces of beef or veal with lard, ham and vegetables––Leonardi means carrots, parsnips and onions––which are cooked with beef broth. The resulting liquid is highly aromatic with a marked meaty flavour that was used to enrich different foods, create sauces, or, in our case, as a condiment for pasta. Today this meat sauce has practically disappeared from home kitchens, traces of it remain in some fine dining preparations as “brown fond” which, despite the different procedures, uses the same principle.

In summary, in the Italian food scene of the mid-19th century, there were two ways of dressing pasta: “alla genovese” and “alla napoletana” which included the same recipe based on meat sauce and, in some ways, became indistinguishable. The fact is that with the same names two other specialties were also indicated: the Genovese indicated the meatless basil puree, today better known as “Pesto alla genovese;” while the Neapolitan was the name given to the stewed sauce that would later become the famous “Ragù alla Napoletana”. All this had to generate more than a few misunderstandings, in particular for the two “Neapolitan” versions that shared many ingredients and a similar preparation, but which were slowly separating due to the increasingly frequent presence of tomato in the stew sauce.

During the first decades of the 19th century the differences between the two preparations became almost constant, forcing somehow to distinguish them and the choice of the name for the white meat sauce naturally fell on the alter ego, that is la Genovese.

Difference between Neapolitan and Genoese ragout

Over the course of the 20th century the two ragouts continued to evolve into individual forms: on the one hand with the constant use of tomatoes and the inclusion of some cuts of pork in the Neapolitan sauce, while the Genoese saw an increasingly marked presence of onions. Even if today two independent preparations appear, these two specialties derive from the same genealogical branch of Neapolitan origin that suffered a split in the first half of the 19th century.

The subsequent spread of other condiments for pasta, some of which had worldwide success (such as Bolognese sauce) and the almost total abandonment of the meat sauce in the kitchen, marked the disappearance of the genoese sauce in the rest of the boot and its persistence only in the Neapolitan city that had given birth to it. In the rest of Italy the genovese variant “di magro” survived, however, which included condiments based on basil, garlic and pecorino. Even today the name of the Ligurian city is inextricably linked to pesto, which remains one of the most famous and replicated recipes in the world..